Have “the girls” started to head south? Has gravity taken its toll on your breasts, and your self-confidence, in the process? Tired of flat, sagging, and flabby breasts?

If so, you’ve come to the right place! Dr. Jaime Perez is one of Tampa Bay’s leaders in breast surgery and specializes in breast lift (i.e. mastopexy) surgery. With his advanced surgical techniques, gentle touch, and artistic eye, Dr. Perez is able to transform your tired, shapeless, sagging chest into the perky, firm, sexy breasts you’ve been dreaming of! 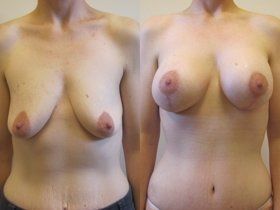 With time, pregnancy, nursing, and weight gain or loss, almost every woman will experience a change in shape and position of her breasts. As breast tissue enlarges secondary to pregnancy, weight gain, etc… the skin and supporting ligaments of the breast are also stretched. Drooping, or ptosis, of the breast occurs when the breast tissue decreases in volume (after delivery of a baby, weight loss, or aging) but the skin and supporting ligaments of the breast are unable to retract to their original position and shape. Thus, the nipple and breast tissue assume a lower position on the chest wall and a youthful, full, perky shape is lost.

A combination of a breast lift and an augmentation is a great way for patients to achieve the greatest success when a breast surgery procedure. The procedure, performed at Plastic Surgery Center of Tampa, has a very low complication rate and uses advanced techniques to help patients achieve stunning results. Dr. Perez is confident that patients will be satisfied with this combined procedure, and considers it one of the best offered services.

There are four different stages, or categories of breast ptosis:

Grade I: Mild ptosis. The nipple remains at the level of the inframammary fold (where the underneath of the breast tissue meets the chest wall).

Grade II: Moderate ptosis. The nipple is well below the inframammary fold.

Grade III: Severe ptosis. The nipple is at the inferior most aspect of the breast tissue (i.e. is pointing straight for the floor).

Breast lift surgery, or mastopexy, is designed to reduce the skin envelope, or amount of skin covering the breast, and reposition the breast tissue so that the nipple is once again above the inframammary fold and the breast has a beautiful, full, conical shape. 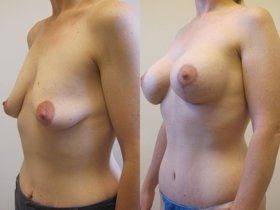 The ideal candidate for a breast lift is a woman who is unhappy with the shape and position of her breasts but is generally pleased with the size of her breasts. Patients who are still in the process of losing weight or plan on having more children should postpone undergoing a mastopexy until they have reached their target weight and are finished growing their family. Changes in breast size associated with weight gain and/or loss and pregnancy can diminish the effects of a previously performed breast lift and necessitate early revisions and reoperations. Finally, women considering any kind of breast surgery should be non-smokers or at least smoke-free for three months before and after surgery.

A breast lift is usually performed under general anesthesia on an outpatient basis, meaning the patient goes home the same day. Rarely, if a patient has other procedures performed in addition to a mastopexy, an overnight stay may be required. The surgery usually takes three to four hours to perform but varies depending on the individual technique the patient and Dr. Perez decides upon.

Crescent or Periareolar Mastopexy- The crescent or periareolar mastopexy is ideal for patients with mild ptosis who require lifting the nipple no more than one to two centimeters and little changes in overall breast shape. During this operation, a periareolar incision (i.e. an incision placed at the junction of the breast skin with the darkly pigmented nipple/areola skin) placed at either the superior aspect of the nipple-areolar complex or surrounding the entire nipple-areolar complex is used. Through this incision, the skin envelope covering the breast tissue is reduced and the breast tissue can be reshaped to a small degree. The advantage to this operation is the minimal amount of scarring which is hidden at the border of the breast skin and areola. The main disadvantages of this operation are that it is not powerful enough for patients with large degrees of sagging, poor skin quality, or flaccid breast tissue. Additionally, the incision placed at the junction of the breast skin and pigmented areola may widen with time, cause flattening of the apex of the breast, and cause “pleating” of the skin that may take several months to resolve.

Lollipop or Vertical Mastopexy- The lollipop or vertical mastopexy is best for patients with moderate ptosis who require several centimeters of nipple repositioning as well as narrowing and “coning” to reshape the breast tissue. This technique uses an incision around the nipple-areolar complex (similar to the periareolar incision, see above) as well as an incision extending from the bottom of the nipple to inframammary fold. This large incision allows more access to the breast tissue itself, a greater amount of reshape, and removal of a greater amount of skin to produce a high, firm, sexy breast. The advantages of this technique are the limited amount of scarring and possibly limited recurrent breast sagging. The main disadvantage to this operation is that immediately postoperatively patients may notice a “bulging” or “dog-ear” at the junction of the vertical scar and the inframammary fold. This usually resolves within six months but occasionally must be revised under local anesthesia in an office setting.

Anchor or Inverted-T Mastopexy- The anchor or inverted-T mastopexy is recommended for patients with severe ptosis, poor skin quality, and/or flaccid breast tissue. This technique, which is the most popular in the United States, uses an incision around the nipple-areolar complex, a vertical incision from the bottom of the nipple to the inframammary fold, and a horizontal incision along the entire extent of the inframammary fold. The larger incisions allows for the greatest access and reshaping of the breast tissue as well as removal of the greatest amount of skin in multiple directions. This results in a dramatic change in nipple position and shape required for many older patients with greater degrees of sagging. The main advantages of this technique are that the results are uniformly predictable and allow for correction of large degrees of ptosis. The obvious disadvantage is the scar burden. Additionally, with time patients may notice a tendency towards “bottoming out” or flattening of the breast and/or recurrent drooping.

Augmentation Mastopexy- An augmentation mastopexy describes a breast lift surgery in which an implant is placed to increase the size of the breast at the same time of the mastopexy surgery (click here to learn about Breast Augmentation). This operation is ideal for patients who have lost their desired amount of fullness in the upper portion of the breast, would like to increase their breast size, and require repositioning of the nipple on the breast mound. The advantage to this operation is the dramatic change in breast shape and upper pole fullness that can only be achieved by placing an implant. The disadvantages to placing a breast implant at the time of a breast lift include an increase in the rate of complications, possible loss/necrosis of the nipple-areolar complex, nipple malposition, breast asymmetry, and scar widening. Because of this higher rate of complications, it is occasionally recommended that this surgery be performed in two stages separated by at least six to twelve weeks. 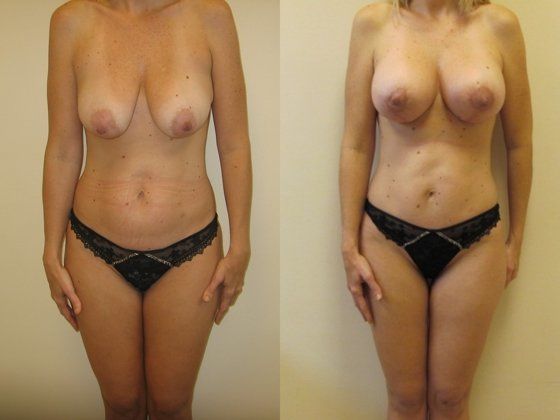 Most patients undergoing a breast lift can’t wait to show off their new figure as soon as possible. Despite the tremendous boost in self-confidence and feelings of attractiveness that most women experience, like every operation, there are well-known risks associated with mastopexy surgery.

The most common complications of a breast lift are wound healing problems, unattractive scarring, and nipple or breast asymmetry. While usually associated with patients who have undergone an inverted-T mastopexy or augmentation-mastopexy, these wounds and minor imperfections can usually be treated in the office or revised in a clinic setting.

Other less common problems associated with breast lift surgery are hematoma (i.e. collections of blood underneath the skin of the breast), infection, and loss of the nipple-areolar complex. While thankfully less common, these problems often necessitate a return trip to the operation room for thorough treatment and revision. Dr. Perez examines all of his patients within one to two days after surgery so that in the rare chance there is a complication, it can be diagnosed and addressed appropriately.

Breast lift surgery typically lasts three to four hours and is performed on an outpatient basis under general anesthesia. Rarely, surgical drains are placed during the procedure and are removed within the first week after surgery. At the first postoperative appointment, the sterile surgical dressings are removed and replaced with a supportive surgical bra. Patients are expected to wear this bra at all times for three weeks. While every patient is different, most women are able to return to work in one week, light exercise in three weeks, and resume strenuous activity (including overhead lifting, etc…) after five weeks. Antibiotics and pain medicine are prescribed following the surgery.